Client agencies that labor largely out of public view on behalf of the world's refugees annually share stats with this blog that astound us every year. Americans live in a civilization ordered by the rule of law. Unless we take the time to look outside our society, we rarely notice the civil disorder that plaques millions of our fellow humans.

At the end of 2021, as a result of persecution, conflict, violence, human rights violations, or events seriously disturbing public order, the UNHCR reported the following deplorable statistics:

If that number isn't shocking enough, in the first months of 2022, more than 100 million individuals (more than the entire population of Germany) were displaced worldwide as a result of persecution, conflict, violence or human rights violations. This accounts for an increase of 10.7 million people displaced from the end of the previous year. In a matter of a few months, the world’s forcibly displaced population reached the highest ever on record. This includes:

What Is Going On? 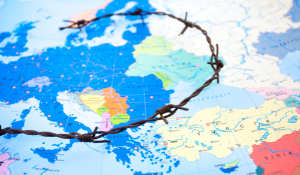 In the first months of 2022, more than 100 million individuals have been forcibly displaced worldwide as a result of persecution, conflict, violence, or human rights violations. This number is so large its impact on our imagination is blurred. Social workers laboring in refugee agencies tell us that the world social order that stabilized for a time after World War II is becoming more unstable as each year passes. As the human population continues to expand and tangible assets become scarcer, the human race will continue to compete. They say that technology and conflict critical mass restore temporary balance, but as we struggle to fit the human population into a finite planet, conflict will continue to erupt.

Check out what others are reading on the FAMCare blog...

Why Social Workers are Venerable to Software Breaches