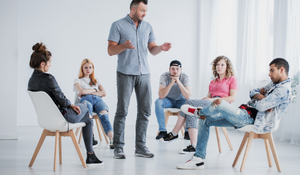 We recently interviewed a retired social worker who spent her entire 30-year career working with addicts and alcoholics in residential treatment centers. We were seeking insight into the drug and alcohol abuse epidemic that seems to be getting worse every year. The insights she shared rang with understanding, empathy, and a double dose of common sense.

GVT - Thank you for taking the time to help our readers understand the mind and make-up of people who lose control of their lives due to drugs and alcohol. Could you share with us how you got involved in drug and alcohol treatment?

RSW - Both my parents were alcoholics. They were good, hard-working, people who loved me and my four siblings, but they grew up during the Great Depression and fought World War II as young adults, so they lived out their adult lives in the grip of what we today call, PTSD. We children watched in wonder as they let their lives gradually deteriorate and both died in their late fifties from cirrhosis and a heart attack. I loved them very much and didn’t understand why they let themselves deteriorate so badly.  That mystery made me choose the field of drug and alcohol addiction.

GVT - Last year (2021), 96,700 Americans died from drug overdoses and 385 people die every day from excessive alcohol use. Year after year, the problem seems to be getting worse. What, exactly, is going on in this country?

RSW - When you use the word, problem, you reveal an almost universal belief that drug and alcohol use is bad conduct that could be prevented if we could only teach people how to behave. Watching my parents and 30 years of living and working with people who struggle with addiction taught me that these are, for the most part, good, decent people who for a variety of reasons end up using substances to cope with life’s struggles. Back in my parent’s day we hadn’t even diagnosed PTSD, so no one knew how to help them. Then, in the 70s we began to criminalize drug use, and our society became lost in criminal justice solutions to what amounted to nothing more than poor coping skills. To a large extent, that’s where we still are. We are inventing ways to punish troubled people and believe that will deter others from abusing drugs and alcohol.

GVT - It sounds absurd when you put it that way. However, doesn’t the amount of human suffering and damage to society demand a response? Drug overdoses have killed almost 1 million people since 1999 and at the same time, drug use went up 61% among 8th graders between 2016 and 2020. What would you have society do?

RSW - We have been waging our so-called “War on Drugs” for almost 50 years and things only continue to get worse which proves that criminalizing drug use has not worked. We must abandon that approach immediately. 30 years of dealing with perhaps thousands of addicts and alcoholics, often successfully, has taught me the following:

Is it too late to turn the corner?

RSW - I don’t believe it’s ever too late. Like we used to say in rehab, one client at a time - one day at a time. If we want to mitigate the negative impact of drug and alcohol abuse on individuals and society, we must first want to help these troubled people, not punish them. Unfortunately, our society is not there yet.

Recommended Readings From the FAMCare Blog

The Social Worker as Peer Specialist

The Opioid Addiction Epidemic Where Do We Stand?