Cops and No Counselors 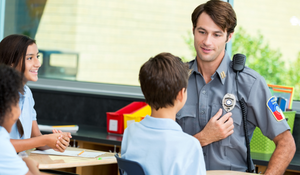 Since the 1900s, U.S. public schools have employed a growing number of school resource officers (SROs) – sworn law enforcement officials. In 1975, only 1% of schools reported having police officers on site, but by 2018, approximately 58% of schools had at least one sworn law enforcement official present during the school week. Since 1998, the federal government has invested over $1 billion to explicitly increase police presence in schools, and over $14 billion to advance community policing, which can include SROs.

Policies that establish a police presence in schools have responded to pressure to keep students safe in the aftermath of the recent random shootings and mass murder of children in our schools. While SROs are one of the most visible ways to promote students’ safety, early research already suggests that SROs have little positive impact on students’ safety and may in fact make students less safe because, when in schools, police officers do what they are trained to do, which is detain, handcuff, and arrest. When there are no other support staff to address behavioral problems, some teachers request help from law enforcement.  This results in an increased criminalization of school children. This leads to greater student alienation and a more threatening school climate. School social workers have been wrestling with this dilemma for the past ten years - seeking a solution to the “cause” of random violence while protecting our children from the present threat.

The Cause of School Violence

Today’s students are experiencing record levels of depression, anxiety, and many forms of trauma. According to the Centers for Disease Control and Prevention, the suicide rate among children ages 10 to 17 increased by 70 percent between 2006 and 2016.

Education social workers are making the case that students of all ages across the entire country are in desperate need of mental health services. It is often these troubled students who commit terrible acts of violence. Social workers point out that the benefits of investing in mental health services are clear: Schools with such services see improved attendance rates, better academic achievement, and higher graduation rates as well as lower rates of suspension, expulsion, and other disciplinary incidents. Data shows that the presence of school-based mental health providers not only improves outcomes for students but, by addressing the “cause” of violence, vastly improves overall school safety.

Yet, that has not been the trend. Instead, funding for police in schools has been on the rise, while public schools face a critical shortage of counselors, nurses, psychologists, and social workers. As the recent report by the ACLU that bears the title used in this blog reveals, millions of students are in schools with law enforcement but no support staff: 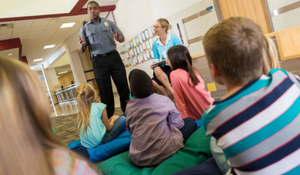 Public policy social workers are quick to point out that the decision by civil leaders to fund SROs and school counselors is not an either/or decision. The immediate crisis demands an immediate response but implementing a long-term solution should not be left behind. Both initiatives require attention and resources.

An immediate increased presence of SROs in our classrooms was a rational and necessary response to the epidemic of recent mass school shootings. But roughly 25% of school police surveyed by Education Week stated that they had no experience with youth before working in schools. Police are trained to focus on law and order, not student social and emotional well-being. The tools of law enforcement — pepper spray, handcuffs, tasers, and guns — are ill-suited to the classroom. The presence of police will not address the root cause of student violence.

Given the clear benefits of investing in school mental health resources, it would make sense for school boards, school principals, and government leaders to be using every available resource to increase school-based health professionals.

If you have enjoyed reading this blog, we have some other wonderful recommending readings that highlight the benefits of social workers working in collaborative roles: