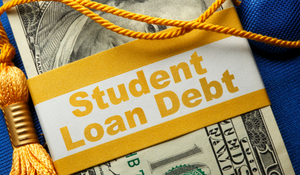 According to the latest student loan debt statistics, there are 45 million student loan borrowers who collectively owe $1.7 trillion of student loans.

"As is so often the case, what began as a creative solution to a social inequity became corrupted by greed and mismanagement," a professor of the history of social work told us. "Sallie Mae was the main facilitator when Congress created the student-loan program back in the 1970s during the Johnson administration. It was a profit-driven enterprise that essentially funneled money from taxpayers to colleges and universities. Congress envisioned it as a partnership between the government and banks to broaden the American dream of a college education for children of modest means."

GVT: How did it get so out of control? I don't even know how many zeros are in $1.7 trillion. A simple associate or even a bachelor’s degree doesn't provide the kind of income it would take to repay such an enormous sum.

SWP: That's the problem, of course. How did 45 million students qualify for $1.7 trillion of loans without any visible income? The question itself is absurd so the answer ventured will be equally absurd.

GVT: The original intent was good. What went wrong?

SWP: Here are the twists and turns this social program took along the way that turned a social solution into a social problem:

GVT: How can we fix this mess?

SWP: As you can imagine, the suggested solutions are controversial. However, since the corruption of this well-intentioned student loan program in effect swindled a whole generation of aspiring students, most of these loans will go into default. In effect, the taxpayer is already on the hook for a large portion of the $1.7 trillion. Fair mitigation steps that place responsibility on the right shoulders are the only solution.

Even these mitigation steps are controversial, but I think they are a reasonable beginning. We must start somewhere.

Enjoy our content? Then please subscribe for instant, weekly or monthly updates! For more information about education and social work, please visit Education in the FAMCare blog.