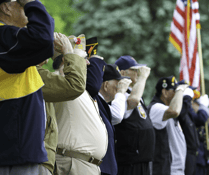 The VA has tested 913,624 veterans and reported 83,527 confirmed COVID-19 cases since the pandemic began back in March. 4, 223 veterans have died from COVID. Sadly, 66 VA employees have died trying to save their lives.

Nearly 50% of veterans are 65 or older, which puts them at greater risk of severe illness or death due to COVID-19. Additionally, many veterans are at a higher risk of respiratory illness due to the environments and toxins they were exposed to while on active duty, which also places them in a higher risk group for coronavirus.

But most confounding for veterans is the risk of dying from suicide related to COVID-19. Military suicides have increased by as much as 20% this year, compared to the same period in 2019, and incidents of violent behavior have spiked as service members struggle with COVID-19. While the causes of suicide are complex and data is incomplete, Army and Air Force officials say they believe the pandemic is adding stress to an already strained force. The VA’s director of social work says: “If individuals who might have PTSD are forced to socially isolate, they are much more likely to self-isolate to the extreme and perhaps completely shut themselves off from others. They may be less likely to reach out for help when they are trying to cope, perhaps due to military-instilled pride”.

One study found that with increased social isolation and higher veteran unemployment, 550 additional veterans beyond the projected 20 per day are expected to take their own lives within the next year.

It has been over 500 days since President Donald Trump signed Executive Order 13861, creating the President's Roadmap to Empower Veterans and End a National Tragedy of Suicide (PREVENTS) interagency task force to end veteran suicide. Yet, since then, an estimated 10,000 veterans have taken their own lives.

The public is not often familiar with the critical role social workers play in medical care. For our beloved veterans, social workers are employing creativity and urgency in trying to de-escalate the growing number of suicides among our veterans during this COVID-19 pandemic. We applaud and thank them for their efforts.