Running Your Nonprofit: Improv vs. Strategy

Most industrial corporations are organized on the military model that emerged after World War II. This “top-down”, “pyramid”, “span-of-control” model of authoritarian decision making was thought to be the most efficient, effective, and disciplined form for complex, sprawling organizations. It was all about the rank and file executing the will of the top decision makers and not roaming “off the reservation” with ideas of their own. It was a model of discipline and efficiency designed for execution.

This organizational model has always been an uncomfortable fit in the nonprofit world. Although most large nonprofits unwittingly adopted the “top-down” “span of control” model of organizational behavior, most became moribund over time because they stuck to structure, tradition and legacy decision making that gradually rendered them unable to interpret and communicate their mission to an ever-evolving staff and marketplace. The more “controlled” and “institutionalized” these organizations became, the less they were able to respond and react to change. The survival of the organization replaced the nonprofit’s true mission.

A New Self-Image for Nonprofits

A four-part series in Nonprofit Quarterly entitled The Sensemaking Organization: Designing for Complexity explains in some detail the historic work of US organizational theorist Karl E. Weick. Unfortunately, his groundbreaking work has gone largely unnoticed by the nonprofit world for the past 50 years. If you are working in an institutionalized nonprofit and feel like you’re aboard a large ship wallowing in an unfamiliar shallow bay, a review of Weick’s work may be enlightening.

Weick described the evolution of post-industrial organizations away from the military model and toward organizations where cause and effect relationships are less clear, lines of command relatively irrelevant, and uncertainty the norm.

In Weick’s Post-Industrial organization, he viewed what he called “sensemaking” to be a precursor to decision making. His fundamental insight was that we can only make decisions about things we perceive and understand.

How to Manage This Post-Industrial Organization

Weick suggested that to be successful, the post-industrial nonprofit organization must capture the learning from the past, but not be controlled by it, in order to meaningfully engage with generally unforeseen events. 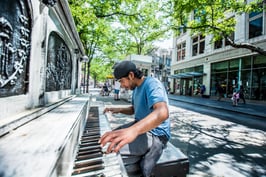 Weick viewed management’s task as more akin to improvisation than strategy, which had been the “holy grail” for most organizations that operate defined plans of action to achieve stated goals.

Weick quotes jazz musician Paul Berliner, “‘Improvisation involves reworking precomposed material and designs in relation to unanticipated ideas conceived, shaped and transformed under the special conditions of performance, thereby adding unique features to every creation’”. The ability to improvise, to combine the old with the new, creates continuously relevant order.

Have you ever been authorized to embellish and reassemble?