Our Long-Term Care Workers - On the Front Lines 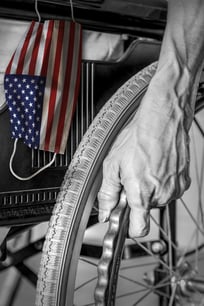 At least 7,300 people living in long-term care have died in the COVID-19 outbreak, a survey of state records by ABC News found. The actual count is very likely far higher, advocates for seniors believe, in part because the available data only covers 19 states where governors' offices and state departments of health have kept track. Other states do not yet report this data and did not reply to requests for this information.

Nursing homes, where many elderly and vulnerable patients live in close quarters, have been identified by state and local health officials as potential hot spots where the virus can easily spread.

Since the first nursing home case in Kirkland, Washington, at least 150 skilled nursing facilities in more than half the states have at least one resident with COVID-19, according to data that the Centers for Medicare & Medicaid Services (CMS) released March 23 and not updated.

And Yet - She Volunteered…

At the Ross Memorial Hospital in Lindsay, Ontario an executive emailed registered practical nurse Meghann Burley, asking if she would take temporary leave and help her former employer, Bobcaygeon’s Pinecrest Nursing Home, where at least 28 residents have died from COVID.

Burley thought about the request for a day, then said yes. “It made sense, logically,” she said, “because unlike so many other health-care workers, I do not have children or older family members living in my home.”

She returned to the home in late March, working afternoon and morning shifts, dressed in goggles, masks, a face shield and gloves.

“I’ve only been there for a week and it is emotionally exhausting,” she said. “I can’t imagine how the girls who have been there since the start are feeling.”

God Bless You All