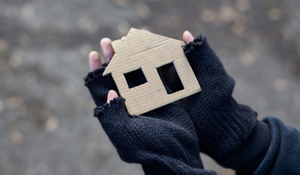 (Excerpted from an article by Paul Moakley in Time Magazine, "Deaths Amoung America's Homeless Are Soaring in the Pandemic.  A Photographer Captures a Community In Crisis")

The Department of Housing and Urban Development reported U.S. homelessness at 580,466 people in 2021. When the coronavirus pandemic assaulted the world's population, the social network that aids the homeless froze along with everything else. Charities that offered daily meals and warming stations shut down. Volunteers, many elderly, were too afraid to work in the soup kitchens they usually ran. There was suddenly no place to eat or go to the bathroom. “Our homeless community found themselves being told to stay entirely outdoors,” says Kate Marshall, a charity worker in Wheeling West Virginia. “There was not one indoor place to go for many months."

The collapse of the safety net that in normal times addresses the complex mix of ­afflictions—trauma, medical conditions, addiction—that accompany homelessness reduced conditions to dire during the profound isolation of the pandemic. “There were days when there were no services at all,” says John Moses, who runs the Winter Freeze Shelter, a refuge of last resort for the three coldest months.

They Began to Die

In San Francisco, the department of public health says deaths tripled over the past year in a homeless population of 8,035. In Los Angeles, home to a vast homeless population tallied at 41,290, deaths increased by 32%, per the online news organization Capital & Main. Homeless deaths in Washington, D.C., soared by 54%. In New York City, the Coalition for the Homeless reported a death rate up 75%.

“The spikes throw the sharpest shadows in smaller places. We’ve lost a lot of people that, you know, we’ve regarded as part of the family,” says Moses. “What’s important to me is to know them by name. When the homeless are not anonymous, every death registers as a memory." 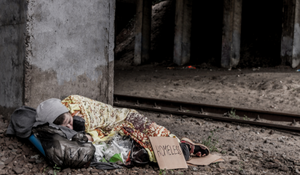 One of those cut off from care was a woman who went by the name Clarice. A young mother, estranged from her family, she was living on the streets while suffering from schizophrenia. “I think anyone on the streets here would say that she was a very good friend,” says Marshall. “If she found clothes or makeup in the Free Store, she would share everything. That might seem insignificant, but in this world, it says a lot about her and why people were endeared to her."

Clarice’s death distills the tragedy of the past 12 months. Her tent was near the center of the encampment in the woods beside a shuttered hospital. When a neighbor known as Ghost found her body, she had been dead for three days.

director of Project Hope, (Project Hope implements preventative Harm Reduction in fighting the opioid crisis). Sorting through the tent with Ghost, Bauer found that Clarice had collected tiny bird cages. And when they lifted the tent, under its wood platform lay the body of a robin. “It all just felt unreal,” Bauer says. Three months later, Ghost, a veteran, would be found dead in a tent too.

Both Clarice and Ghost died from accidental drug overdoses. “Trauma begets trauma,” says Bauer. “It is not surprising to me that when we’re having a crisis, we revert back to whatever coping mechanisms we know. It’s like taking all the traumas and bringing them to this convergence point of rejection, loneliness, insecurity, and no support systems. They lost access to their social workers. Suddenly we were having to say, ‘Yes, your friend just died because they were traumatized, and they overdosed. But we’re just going to have to sit here under this bridge.’ It just felt like harm on top of harm.” 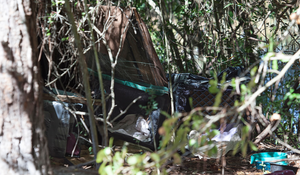 After Clarice’s death, the rest of the year unraveled “like a piece of yarn,” says a young woman from the same camp. “You pull it, and it just comes all unfrayed.”

Drug users talk about struggling between detox and addiction. Domestic violence survivors, trans people, developmentally disabled, ex-cons all complain about the barriers to housing. When talk turns to the deaths of the past year, one tired man says, “I don’t think they intended to end their life like this, you know. We all say we’re going back to normal, but what’s normal? I don’t know how to get there.”

"The kinship between helpers and those they help runs deep," says Bauer, the RN. “The short version of my story is, I grew up in a home where I experienced every kind of abuse. When I tell people it is a miracle that I am not homeless and living under a bridge, it absolutely is. Every time I write RN after my name, I still can’t believe that I achieved this,” says Bauer, who started nursing school when she was thirty-six.

Did you enjoy this blog selection?  Then please subcribe to our FAMCare blog for instant, weekly or monthly updates.