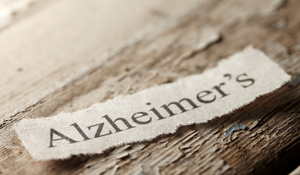 In the 2004 film, The Notebook, James Garner watches Gina Rowlands, the love of his life, slip away into the isolation of Alzheimer's disease. Garner's character reflects as Gina Rowlands stares off into the space of her isolated mind:

"The reason it hurts so much to separate is because our souls are connected. Maybe they always have been and will be. Maybe we've lived a thousand lives before this one and in each of them we've found each other. And maybe each time, we've been forced apart for the same reasons. That means that this goodbye is both a goodbye for the past ten thousand years and a prelude to what will come."

I'm Not Gonna Miss You

In the middle of his journey into the abyss of dementia, Glen Campbell, the country music icon, wrote a song about his experience with Alzheimer’s called, I'm Not Gonna Miss You. His lyrics went like this:

You're the last person I will love.

You’re the last face I will recall.

And best of all - I’m not gonna miss you.

I'm not gonna miss you.

Although meant as an insight into the consciousness of the Alzheimer’s patient, that lyric is a poignant expression of suffering for the spouse left behind.

Many years ago, Allan Vann, a social work educator, shared the heart-breaking story of putting his wife Clare, who was suffering from Alzheimer’s, into Assisted Living.

"I had reached the place in my life that many Alzheimer’s spouses eventually come to know all too well. I had to accept that Clare and I now had a relationship more like father and child than husband and wife. I had to accept that I’m now both married and widowed at the same time. At that moment I knew I needed “the serenity to accept the things I cannot change, the courage to change the things I can, and the wisdom to know the difference.” (Allan S. Vann, Ed.D, MS) 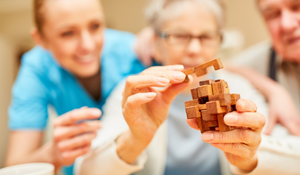 Elder care social workers are steeped in the suffering of the Alzheimer’s spouse. They recognize that this crisis goes beyond grief counseling. The families and spouses of dementia patients must learn to cope with the most unique of emotional challenges. As Allan Vann put it, "I'm now both married and widowed at the same time."

After many years and thousands of Alzheimer’s patients, elder care social workers have come to some consensus on the tools families and spouses need to acquire to cope with the care period of a dementia patient who is slipping away.

As social workers, we need to understand who plays what role in each family, and how this keeps the family functioning—whether in an adaptive or maladaptive manner—in order to determine interventions that can best assist the family and determine the course of care. We must continue to be sensitive to the suffering behind the suffering.